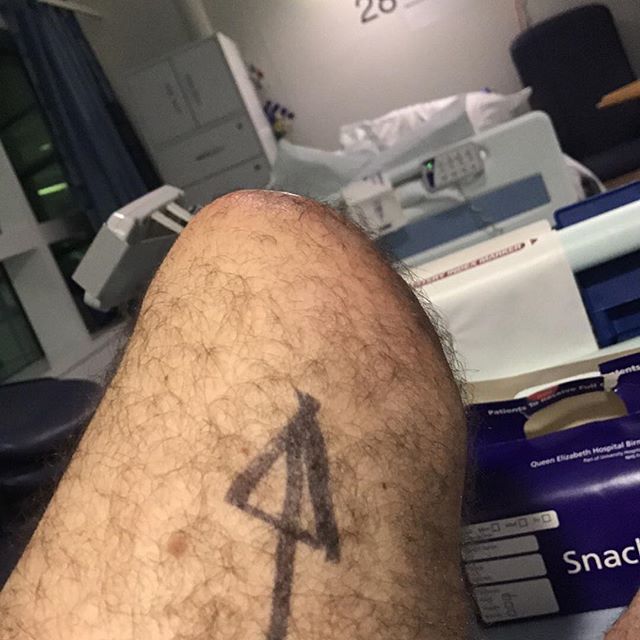 So you might of guessed that I decided to go ahead with the operation.

I packed a bag with mainly shorts and t shirts. Me and Claire set off for Birmingham I drove her car and we didn’t really talk all the way there probably because we did not want to upset each other. Claire knew I was worried about leaving her at home with William for so long and I was nervous about the operation. I knew Claire was worried about leaving me on my own for so long and she knew the operation was a risk.

So we got to the hospital and checked in to my room, unpacked and took my left socket off for hopefully the last time ever! Which was quite a strange feeling after putting it on nearly ever day for the last 8 years and in the back of my mind I knew if it went wrong I would never put it on again but at the same time if all goes to plan I never have to wear a socket again. The doctor came to see me with the surgeon and a few other people and we chatted about the risk of death and infection I signed some paper work and it was final, the operation would be first thing next morning. Me and Claire chatted about the logistics of the next few days as Claire was staying till Saturday and the boy was in school, REDS cafe still needed running and building work was happening at the bungalow! But Claire had it all arranged, my mum and sister was staying at ours and Claire’s mum was having William which he was very happy about.

Then another lad turned up who was having the op (I’m not mentioning his name as it’s not my place to do so) so that was great we where both talking about what it would mean for us and any concerns we had. Claire said her good byes and would see me again on Thursday afternoon after the op.  Sleep that night was difficult with thoughts running through my head and other patients making noise but I got a few hours rest.

I got up about 06:00 as I wanted to get a shower before going into theatre and it’s a good job because the team turned up at 08:30 to take me down and they asked one last time if I wanted to go ahead then it was on with the gas mask and I would wake up with a titanium pin sticking out my leg!

About 15:00 I come out of recovery and moved back to the main ward. I was not in pain just felt a bit uncomfortable, but I had nerve block in my femoral nerve and one in my sciatica nerve so that was stopping most of the pain and I had a morphine drip which I could press myself if I needed extra. The rest of the evening I was in and out of sleep and when I was awake was not making much sense!